We recently wrote a blog post about the trauma experienced by self-representing litigants in court. Now we take a look at the impact of childhood experiences in the justice system.

An informative research report by Melissa Corbett titled: Adverse Childhood Experiences and the Justice System, was recently published on the A2J Portal. This report gives insight on how early childhood experiences shape our brains and influence the rest of our lives. 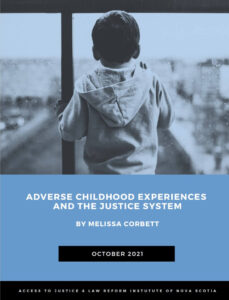 According to the report, children who experience quality bonding and positive interactions develop healthy executive functions. On the other hand, negative interactions experienced in childhood lead to harmful neural connections in the brain which often results in poorer social outcomes.

These negative interactions are termed Adverse Childhood Experiences (ACEs) and they severely impact brain development. Prolonged or frequent exposure to ACEs can result in toxic stress which often leads to illnesses such as cancer, diabetes, obesity, heart disease, anxiety, depression and substance use.

ACEs are divided into three categories:

It is important to note that ACEs is not the same as childhood trauma. Trauma is one possible outcome of ACEs, but not all ACEs lead to trauma.

It is possible to prevent ACEs from becoming trauma through early intervention in the form of caregiver support and positive relationships. There are also treatment options available for trauma and ACE exposure in childhood. These include:

ACEs often lead to long term health problems. This in turn causes increased health expenditures by the government thus causing economic hardship for its people. This creates a vicious cycle since children living in poverty are at higher risk of experiencing ACEs. According to Scotland Children’s Wellbeing Report, instead of dealing with the aftermath health impacts of ACEs, governments should reallocate funds to preventing child poverty thus also preventing long-term health issues.

The justice system is a major contributor to ACEs in children when it comes to issues such as divorce, parental incarceration, custody battles, adoption, migration and violence. Children from divorced or parent separated homes are more vulnerable to mental and chronic illnesses. The same goes for children separated from their parents due to parental incarceration, loss of custody, etc. When a caregiver is absent or unreliable, the child is likely to form anxious or avoidant attachment styles which affect their relationships later in life.

The judicial system in Canada is centered on an adversarial system which often creates more stress. The Council of Europe recommends child friendly justice; a system that guarantees the respect and implementation of children’s rights. Alberta Family Wellness Initiative (AFWI) is also working to reform the justice system through awareness and education that helps parents approach divorce with the children in mind and settle out of court when possible. AFWI has programs like Family Justice Navigators and the Multi-Agency School Support Team (MASST), which collaborate with litigators and police to support children and at-risk youth, outside of court.

The Reforming the Family Justice System Lab (RFJS) also recommends justice reform through a shift from the adversarial system to one centered on collaboration with indigenous communities and traditional knowledge.

On July 1, 2020, the Divorce Act of Canada was amended to replace the term custody order with parenting order. This language shift is expected to reduce conflict between parents. An amendment was also made requiring lawyers to encourage their clients to solve disputes through mediators before going to court. The Nova Scotian government has updated its Parenting and Support Act to align with the federal reforms. Nova Scotia also has a SeaStar Child and Youth Advocacy Centre (at IWK Halifax) which collaborates with law enforcement and social services to provide a safe environment for children who may have been abused.

I highly recommend reading the full report to get an in depth understanding on the intersection between ACEs and the justice system.

For more information, see The Brain Story from the Alberta Family Wellness Initiative and the Reforming the Family Justice System Lab’s website.

Newer Understanding the Needs of SRLs in Atlantic Canada: The National Self-Represented Litigants Project Opens an “East” Chapter
Back to list
Older The Use of McKenzie Friends in Nova Scotia