The National Self-Represented Litigants Project – East began in 2021 in Nova Scotia and is working to outreach across Atlantic Canada. One of our main goals is understanding the needs of self-represented litigants in Atlantic Canada. From our analysis of data compiled by the NSRLP from 2016-2021 we can see that there needs to be:

Self-represented litigants felt that they were being denied access to justice in having to follow complicated rules of court. As one SRL reported:

“In my view, the issue is not the rule or the procedure, rather the issue is the party is in court for a reason – they want to be heard. More often than not, the rules and procedures trump substantive issues raised in chambers by one or the other party. My experience in chambers has qualified me as a mountaineer.”

A number of SRLs reported feeling discriminated against and demoralized after representing themselves:

“For most self-represented litigants, like myself, we are not treated fairly nor do we as a group have equality when we go to court. The action SRLs take in going to court alone is self-defeating and deeply demoralizing. It renders the SRL psychologically battered, ultimately financially impoverished and economically injured for the rest of their life.”

SRLs who filled out the Intake Form, however, were very willing to provide advice and moral support to other SRLs:

“You have to prioritize your case, but you have to live your life too. Dedicate time to your case and time to your life. Just as a lawyer would. It will overwhelm you; it will stress you. You must be passionate, but almost possess a level of numbness. Believe in yourself. Don’t at any time think you’ve won until you’ve received a verdict. Read case law to friends and ask you they think should win and why, then read and discuss the verdict. It’ll open your perspective. You have to be ready for anything.”

“Do your research. Meet with every resource. Be open minded. Know the law. Know the facts. Know when to cut your losses. At the same time, don’t automatically believe everything a lawyer tells you. Lawyers make mistakes too.  Know the Civil Procedure Rules in and out. Be aware that the law is abstract, and the same standard will not apply to you as it would a lawyer so there is wiggle room. But a self-represented litigant cannot afford to not know the Civil Procedure Rules. There is no amount of research that should satisfy a self-represented litigant that they understand the rules or the nature of proceedings”

These lessons come from data collected by the National Self Represented Litigants Project using their Intake Form from 2016-2021. 32 respondents filled in the Intake Forms from across Prince Edward Island, Nova Scotia, New Brunswick, Newfoundland and Labrador from 2016-2021.

In analyzing the Intake Forms we found that most respondents to the survey represented themselves in Supreme Court Civil cases (Queen’s Bench in New Brunswick). These can be complex cases, worth over $20,000-$25,000 in value, where people must follow complicated Civil Procedure Rules. What may have made these cases more complicated was the fact that in most of these cases (97%), these SRLs found themselves facing lawyers.

The survey results showed that 52% of respondents had worked with a lawyer at some point in their current case, with the majority privately retaining their lawyer. It is important to note that legal aid is not available for civil cases in Supreme Court, regardless of income.

Most SRLs had higher levels of education – 45% had attended university or had some other professional qualification. The majority reported an income under $50,000. 37% of respondents indicated that they had incomes below $30,000 while 30% had incomes between $30,000-$50,000. This may indicate that persons living on $50,000 a year and under find it difficult to hire a lawyer for the entirety of their matter.

In terms of Alternative Dispute Resolution, data collected indicated that Atlantic Canadian respondents were not being offered mediation services as often as those outsides of Atlantic Canada.

To read more about SRLs in Atlantic Canada visit our website here and read our report here. 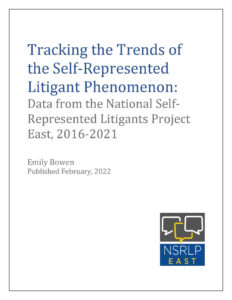 Newer 10 Tips for a Cost-Effective Lawyer-Client Relationship
Back to list
Older Understanding the Needs of SRLs in Atlantic Canada: The National Self-Represented Litigants Project Opens an “East” Chapter

One thought on “NSRLPE Intake Report 2016-2021: Tracking the Trends of the Self-Represented Litigant Phenomenon”